Blue Water Sailing School gives students the tools they need for a lifetime of new adventures. Every so often, a graduate will send us an update about how they’re using their Blue Water education to change their lives, or even the lives of others.

If you have a story that you’d like to share, send it in and it may show up here!

Drew first sailed with Blue Water on a Christmas trip with friends, taking Course A + Bareboat. He later came back and took Course C, then completed his training with our Offshore Passagemaking course and a journey from Fort Lauderdale to Saint Thomas. 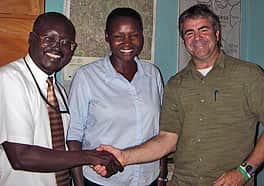 A successful businessman in Geographic Information Systems, Drew had a dream to bring GIS training and mapping services to conservation and humanitarian organizations, especially in developing countries. To do this he launched Service at Sea, a program of the non-profit GIS Institute that’s dedicated to accomplishing this mission.

In the summer of 2006, Drew went on GIS training and support tour of six African nations. As of fall 2007 Service at Sea is preparing to launch the first leg of a multi-year cruise, visiting locations in all over the developing world. You can read more the program’s mission and progress on the Service at Sea web site.

Mike and Amy took Course A + Bareboat Chartering in August 2007, having never been on a sailboat before. Upon returning to their native Colorado, they purchased a Catalina 250 (see photo at right) to sail on local lakes.

Scott took Course C in order to better prepare for cruising with his family. Leaving Port Townsend, WA in early September 2006 they made it to Mexico in Mid-November and have been cruising beautiful Mexican waters since. They’ve kept a journal of their adventures on their blog

Subscribe to Our Newsletter
Enter your name and e-mail address to sign up for our monthly newsletter.
Sailing School Testimonials

We actually went somewhere (Key Largo), rather than returning to the dock each evening. The course was made to be an adventure, as well as simply instructional. The weather was “made to order” — sun and gentle breeze Saturday through Wednesday, then Force 8 for our ‘foul weather instruction’ on Thursday.

I thought it was an excellent, challenging course. It definitely wasn’t a “cruise.” The instructor expected a lot from the students. I like that.

I have nothing but the utmost praise for your entire operation and the quality of the instruction that I received. Al Hatch is a consummate instructor and brings to this activity a love and a passion that is genuine and expansive. I hope to be able to return to Blue Water to experience some of the higher-level courses of instruction, and I certainly would have no trouble at all recommending your company to anyone.